Situated along the historic old miner’s trail that is now Highway 49 sits picturesque Auburn, California. With a similar history to the neighboring towns of Grass Valley and Coloma, Auburn was once a large gold rush settlement full of prospectors seeking their fortunes in the Sierra foothills. It has since become a haven for the artistic and a permanent destination for the adventurous.

What began as a Native American village of the Nisenan band (of the Maidu tribe) morphed into a tent city of miners during the Gold Rush of 1849. Men and women would camp along the Auburn Ravine as they mined for those elusive gold nuggets. Auburn was known as “North Forks Dry Diggings”. Many stopped at North Forks as they made their way to nearby Coloma, the hub of the California Gold Rush. In 1865 Auburn became part of another historical revolution, the building of the first Transcontinental Railroad. 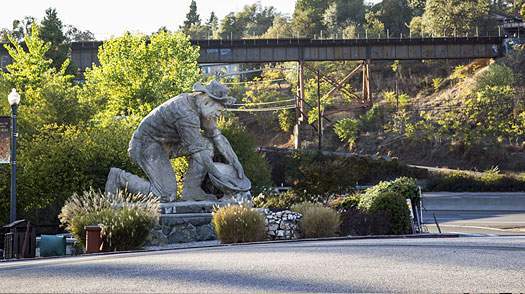 Remnants from the 1800’s in Auburn still linger and live on. Historical buildings include the old Fire Station and the Post Office. Artifacts and more history can be found at the Placer County Museum. The old town appears like a page from a history book; however, Auburn boasts of recent exposure. Several movies have been partially filmed in the quaint city of Auburn, including but not limited to:

Nowadays, Auburn is the perfect place to be for artists. This small community is a mingling of times where the 1800’s meet the 21st century. The only changes are the building facades and the paved streets and streetlights. It’s a painting waiting to happen for artists. Plus, the town of Auburn continually invests in the performing and visual arts.

With a population of nearly 13,000, Auburn, California maintains an old-world feel. However, residents are not far removed from the amenities of the city. Within close proximity to Sacramento and other major metropolitan areas, Auburn is a great location for active adults.

Auburn naturally attracts the adventurous. In fact, two of the most difficult marathons take place each year in Auburn; The Tevis Cup and the Ultra Marathon. The rivers, lakes, streams, and mountains provide additional exploration and recreation.

Whether hiking up the Sierra Nevadas or rafting down the American River Canyon, there is plenty to see and do. There are more than 140 different places to eat in Auburn that range from bar and grille to upscale dining. The natural beauty of the area make homes for sale in Auburn in high demand.

Located just north of Sacramento, temperatures in Auburn are usually within the 70’s and 80’ in the summer months. During the fall and through spring, Auburn sees its fair share of rain. Unlike many parts of California, this area actually gets to enjoy the changing of the seasons. On rare occasions, you may even see a bit of snowfall. And since it is located at the base of the Sierra Mountains, historic glaciers have carved out spectacular lakes and valleys while the mountain peaks provide striking views.

The population of Auburn, California has seen an incredible increase of 11% since 2000. The rise in local citizens could be due to the affordability of housing in Auburn. The cost of living is slightly lower than the rest of the state.

Homes for sale in Auburn, California

Homes for sale in Auburn offers several possibilities. You may find a cozy two bedroom, one bath home for less than $200k. Or, you could find a larger home for less than $700K. On average, homes for sale in Auburn are selling at just over $370K, nearly identical to the average median home price statewide. There is a mix of single-family homes, town homes, and condos that make up the Auburn real estate market. While inventory (like most of California) remains tight, there seems to be something for everyone in historic Auburn.

Auburn offers natural beauty, an active social ambiance and a historical richness that can be hard to find in one location. Are you searching for homes for sale in Auburn, California? Contact one of our real estate agents to explore the possibilities of this beautiful area.

By registering, you agree to our terms of use and that real estate professionals from Network Real Estate and lenders may call/text you about your inquiry, which may involve use of automated means and prerecorded/artificial voices. Message frequency varies. Text HELP for help or STOP to cancel. You don't need to consent as a condition of buying any property, goods or services. Messages/data rates may apply. Additional information about data use is in our privacy policy.